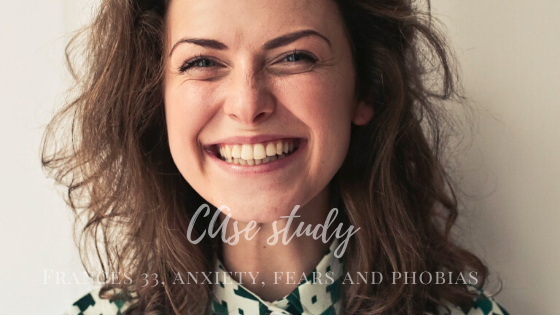 Frances, aged 33, came to see me for fear of driving on a motorway. “When I’m in the car my brain is telling me: ‘Pull over, you’re trapped’ and I get in a state of panic.” She said it was even worse when she was in the car with other people. “It’s not that I’m thinking negatively, it’s just a full-blown panic that comes out of nowhere”. She is a very good driver and has never had an accident. “It all started in my early 20s when I got very ill”.

She also has a terrible needle phobia, just like her mum and her siblings. She had fainted and hurt herself really badly on several occasions. On one occasion she had fainted just at the thought of seeing a needle and hit her face so hard against the floor that she got stitches. Frances doesn’t like tiny planes which can be a bit awkward as she has to travel to work or drive people when working on the field. Frances says she feels quite positive as a person, confidence has never been an issue and on a happiness scale from 1 to 10 she says to be a 7.

As Frances is very anxious about having to drive on a motorway, and it’s one of the demands of the work she does, we start the therapy work right after the initial consultation. As her colleagues often ask her to share a ride she feels even more awkward as she has to refuse. “It gets especially bad when I’m with someone in the car,” she says. When I ask her to think how she’d like to feel instead when driving, she says:

“I think about other things,” “I’m engaging in a conversation if someone is in the car,“”I’m fixed” We start to work on her anxiety as she reports it to be as high as 9 out of 10.
We gradually reduce the anxiety levels from 9 to 8->7->5->3->0
After trying to trigger the same emotions, Frances reports: “Anxiety is not there”.

When asked what’s been good since our last session, Frances reported that work has been up and down, but she felt better about driving and been feeling okay even when tired. She hasn’t had an opportunity to have someone in the car although she offered a ride to a colleague. “Anxiety is gone when I’m in the car though,” she says. Frances added that her mind was not playing up when driving but felt tense when on a bridge the other day which made her realise for the first time that she had a fear of heights. She also added that she went on an interview and she felt okay compared to her previous, anxious self.

We started working on her fear of heights which she said to be as high as 9 out of 10.
When asked how she’d like to feel instead she says: “It’s just not a thought anymore,” “I want to do it again,” “I’m focused on the destination”
We gradually reduce the fear from 9->5->3->4->0
Near the end of the session I asked Frances how she felt about heights and bridges now, and she said: “I think I feel okay”

When asked what’s been good Frances said she’d been feeling okay about driving.

She also mentioned that her physical activity had improved. “I started doing yoga online as it helps me calm the mind and be in the now. Otherwise, I think a lot, “ said says.
Frances mentioned that she needed to go to the dentist. “I haven’t been for years. I used to faint sometimes at the thought of it and smash my face.” When asked how high is the fear on a scale from 1 to 10, 1 being low and 10 being high, she said 10.

I asked Frances her how she’d like to be and feel instead, Frances shared: “I’m pleased for getting fixed’” “I’m confident that whoever is administering the needle is doing it for the good” “I’m staying aware and calm about what’s happening”

I asked Frances what had been good and she said that she booked an appointment with her dentist and felt okay about it. She hasn’t been to the dentist for years because of her needle phobia. Through conversation she said she didn’t feel anxious anymore but realised she had a fear of fainting as she had fainted so many times and smashed her face. She also realised that her worst memory of fainting happened years ago, in the shopping centre, when she found herself lying on the floor, surrounded by strangers. It all happened because she suddenly fell ill and, as a consequence, was in and out of hospital for three years.
We talked about the unpredictability of life and how sometimes one needs to be a bit philosophical about it and find a way of accepting change and everything that comes with it. When I asked Frances how she would like to be and feel instead, she said: “That’s life,” “People are there to help’” “People are generally nice,” “Uncertainty is fine”.
When asked about the intensity of the fear, Frances reported 10 out of 10. We started the work and it was soon reduced to 7-> 4->3->0
When I asked Frances how she felt about it now, she answered: “It feels like a past event.”

Feeling the same way as Frances use to and would like me to help?

Please get in touch via email to find out more or schedule your free consultation call.